Perception Change (Due to MLK Day)

I know this may be old news since it was already a few days ago and Courtney wrote about her experience, but I am still going to talk about Martin Luther King Jr. Day.

Like many other seniors, I gave a workshop to fellow students and teachers. But when I first knew that the theme of this year’s MLK Day on Gould will be on Africa and saw the topic Nate Brown(my partner) and I would have to do, I was quite surprised. I could see the obvious connection between Dr. King’s struggle for human rights and Nelson Mandela’s under Apartheid, but not between Dr. King and recent economic development of Africa.

But I’m glad that I got to this topic because it was indeed an eye-opening experience. Before, I had held onto a perception that many still share – that Africa is indigent and politically unstable; that detestable violations of human rights happens there; that Africa is a “hopeless” continent.

“The Hopeless Continent” was the phrase The Economist used on May 2001 of its print edition to describe Africa. A decade later, the very same magazine described Africa as the “hopeful continent” in covering Africa’s rising. Through  research I found out about the rapid economic development of African countries, improvement in standard of living and growing political stability (female leaders Joyce Banda and Dlamini-Zuma elected in Malawi and African Union in 2012, peaceful secession of South Sudan through referendum). 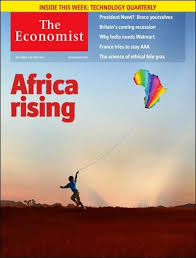 Nate and I presented these inspiring change and growth to not only to fellow students and teachers but to our visitors Juliana and Ade (I hope I spelled correctly). But I believe what made it truly meaningful is that it taught me that I should learn to question my own perception, as my old perception was proven quite erroneous; I should not simply accept images drawn by others, but instead be skeptical and find out facts before I can formulate my own view. It is an essential attitude were I truly to be a global citizen as I wish.

Has my summary of my presentation helped change your perception? Do you have some other perceptions you now think should be questioned? (as a Korean, I know that many Westerners erroneously believe that South Korea is still a war-torn and undeveloped country.)

Finally, I leave you with a quote from Dr. King: “Our only hope today lies in our ability to recapture the revolutionary spirit and go out in a sometimes hostile world declaring eternal hostility to poverty, racism, and militarism.”

See you next week!